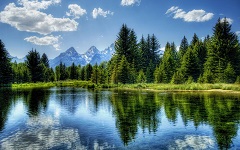 Here’s my latest offering, thought of earlier while in the bath and written this very evening for your reading pleasure.  I hope you like it.  If you do, please comment or share it so others can enjoy. 🙂

Marie had just climbed the tree to her favourite position around 6am.  She looked out across the lake as she had done for the last few months and spotted the green garden refuse sack as it floated back to the surface.  The rocks she’d weighed it down with must have drifted out of the bag.  She was never good at tying knots.

She would have used her boat to go out and weigh it back down again with some stones but the sun was coming up and a jogger had come into view.  Headphones in, the guy might not have noticed had the sun not glistened across the water, highlighting the floating sack just a few feet out.

From her position, she saw the jogger look twice before coming to a stop to have a proper look.  Unable to tell what it was, he continued.  Marie assumed he was off to report what he thought was probably some sort of fly tipping.

Marie decided she had about 30mins before the park ranger turned up.  From her elevated position in the tree she thought this wasn’t enough time to fix the situation and it was better to watch how it all plays out.  She had taken breakfast when she left the house at 5am and had enough snacks to last till lunchtime.  It also helped that she could see everything but no-one knew she was there.

As expected, the park ranger turned up after about 25mins.  He looked out at the bag in the lake.  Reaching into the back of his pickup, he pulled out waders and a long pole with a hook.  He put on the waders, picked up the pole and headed out.  After a few minutes of playing ‘hook a duck’, he managed to make contact and pulled the bag towards him.

Marie was sat high in the tree.  From her vantage point, she could tell the bag smelt from the reaction of the ranger as he pulled it closer.  Sure enough the tie had come undone.  She could tell this because the ranger pulled the open section close to him so he could peer inside.  She laughed as his immediate reaction made him jump and fall backwards into the water while projectile vomiting.

As soon as he got his dignity back, the ranger made a call on his mobile.  Marie assumed this was to the police.  Brett had been missing for a little over 2 months now.  She was actually surprised it had taken this long for someone to find him.  After all, this was a favourite spot for fisherman and any one of them could have hooked the bag while fishing.

Marie hated Brett for what he did to her and he found out the hard way it was wrong, so very wrong.  Since killing him, she’d sat in her tree hideaway every day, just waiting for this moment.

After making the call, the ranger got to work cordoning off the area so no-one else could stumble on what was now a crime scene.  The police themselves were pretty quick.  Within 20 minutes, 4 vehicles and an ambulance had turned up, within an hour there were divers in the lake and people in white overalls examining the body in the bag.  There was even a guy in a long coat taking notes from the ranger and a lot of police on the phone or wandering around the scene.

Marie thought this was the most excitement she’d ever experienced, it was just like watching crime shows on TV.  She started naming the people like the actors in her favourite programmes.  She even imagined the conversations they were having and acted them out carefully in her tree.

By mid-morning 2 TV crews had arrived to cover the breaking news story.  She watched, almost tempted to give an exclusive confession to the woman she recognised, if only to get her face on TV.  Of course, it’s unlikely anyone would believe her and they’d probably just tell her to run along.

Marie had placed some things in the bag to let anyone who found him know what an evil man he was.  She knew they would point to her eventually but wanted people to know about the man in the bag.

Climbing down from the tree, she carefully stayed out of sight of everyone in the now very busy crime scene.  She ran as fast as she could back to her house on the edge of the forest and entered by the back door.  “Mum?” she shouted.  “Mum.  Where are you?” There was no response bar a slight sniffle.

Walking through the house, Marie checked every room.  As she walked through the hall, a policeman’s head popped out of the lounge and asked her to come through.  She did so cautiously.

As she entered, her mum was sat down in a ball of tears on the sofa with another woman comforting her and handing out tissues.  2 policemen were there as well talking ‘carefully’ to her mum.  Marie pretended to look sad as she entered.  Seeing everyone there, she ran to her mum and gave her the biggest hug she could.

One of the policeman spoke up, “Ms Muldrow, as said, we believe the person is your missing boyfriend but need you to formally identify him.  Do you feel up to it now or do you need some time”.

“Yeah… Err… yes”, Marie’s mother said, “Yes, I would like to come with you.  At least this nightmare will finally be over”.

“Thank you Ms Muldrow, we understand what you’re going through and truly appreciate your ability to help us at this time”.

The other policeman spoke to me, “Hello Marie, how are you?  Your mother says your 6 but you look so much more grown up.  Are you ok to stay with this nice lady while your mummy helps us with something important?

Marie’s mum said, “Its ok honey, I’ll be fine.  You go with Stacey and I’ll see you very soon”

Stacey held out her hand and Marie took it.  Everyone else left the house.  Marie went to play in the centre of the lounge while Stacey watched from the window as they all got into the waiting police car and drove off.  Once gone, she then carefully closed the curtains and moved towards Marie playing on the floor.  “Hello Marie, can I let you into a secret?”

“Uh Huh”, Marie said while playing with her balloon on a stick.

“Uh Huh”, Marie said again without reaction.  Quietly, before Julie could say anymore, Marie stamped on Julie’s foot as hard as she could.  When she bent down in pain, Marie turned around and stabbed Julie straight through the eye with the balloon stick and started to run out of the room.

Julie, in a lot of pain, managed to grab her by the collar before she could get away, Wincing from the pain and holding Marie while she kicked and screamed, Julie reached for her handbag to get her gun…

© McCarthyMR Create a free website or blog at WordPress.com.