Margaret, prepared as always thanks to Dreamer, slowly rose above the blockage and headed into open sky. It was a beautiful clear blue, bright blinding sun with not a cloud in sight. “Hey you two” Dreamer said, “I can see the door from here.”

Just then a bird came shooting past them. It appeared to be completely out of control, flapping its wings wildly trying to right itself.

Looking in the direction the bird came from, they saw another team under heavy attack from a very large bird. Thinking better of joining in, they watched the fight from afar. Hoping the team would get away. “Oh dear, poor Dragonfly.” Margaret said. As she saw the Dragonfly being eaten by the bird.

Mr Marshall and Mrs Margaret Healy have thought they were dreaming ever since, using the Data collected in Marshall’s dream machine, they found an entrance to this fantastical world.

Marshall had always felt there was something else to this world that seemed to be missing so when he found an anomaly in his data, the adventurer in him simply had to investigate.

Margaret has always been by her husbands side ever since the day they met.  She wasn’t there for the ride though.  They were a team and she led the way more often than he did.

Unlike the majority of visitors to this place, the Healy’s did not have to go through the challenges to get back home.  They knew perfectly well how to get there but they chose to stay.  They wandered with open eyes and enjoyed the place for all the wonder and magicalness it had to offer.

Occasionally, they would find themselves doing a challenge for fun.  “For the experience”, they would both say.  So when they stumbled across the chance to fly a Dragonfly, even with the danger involved, they jumped at it.  In fact they couldn’t believe their luck.

They went into the hanger open eyed and found their Dragonfly.  He told them his name was Dreamer.  They looked at each other. ‘apt name for us’ they both thought.  They climbed aboard Dreamer and got themselves strapped in.  They had a quick run-through of the controls, then set off.  “This is about to get very interesting.” Marshall said to Margaret.

With Marshall at the gun and Margaret fully versed on what every button did at the controls, Dreamer and the rest of the teams set off.

Excited, he said “I just wanted to say good luck.  This is going to be such fun!”

“I know darling.  It already is and we’ve only just started.”

“What do you think of the other teams?”

Margaret replied with a smile. “They’re all lovely but I don’t think they are going to win.”

Marshall thought about this for a moment, then said “you know what, I think you may be right.”. They smiled, then got back to the job at hand.  After all, they had a race to win.

Both Marshall and Margaret were in their sixties. Although Margaret would never admit it, her eyesight was failing.  She whispered her slight problem to Dreamer and he offered to be her eyes, nudging her in the right direction if needed.  Margaret sat back, very happy.

As a team, they took their time. Meandering through the course slowly so as to see and avoid the dangers long before they became apparent.  This worked pretty well except for the birds.  even so, it seemed the sun was shining on Marshall and Margaret and the birds were no-where to be seen.  So they carried on meandering along the edge of the pond, steering clear of all the frogs.

This continued until they were about two-thirds through the course.  This was the point they had to rise up due to some dense foliage.  Margaret, prepared as always thanks to Dreamer, slowly rose above the blockage and headed into open sky.  It was a beautiful clear blue, bright blinding sun with not a cloud in sight.  “Hey you two” Dreamer said, “I can see the door from here.”

Just then a bird came shooting past them. It appeared to be completely out of control, flapping its wings wildly trying to right itself.

Looking in the direction the bird came from, they saw another team under heavy attack from a very large bird.  Thinking better of joining in, they watched the fight from afar. Hoping the team would get away.  “Oh dear, poor Dragonfly.”  Margaret said.  As she saw the Dragonfly being eaten by the bird.

Marshall nodded, “nothing we can do for him.  Do you think the people will be ok?”

“I’m sure they will dear.” Margaret said hiding the worry from her face.

“Don’t you worry about that Dragonfly.” Dreamer spoke up. “Haley is her name and she’ll be ok.  We don’t really get eaten you see.”  The Healy’s looked quizzically at each other, unconvinced.  “As soon as our race is over, however we fail to finish, something truly magical happens and we appear back in the hanger as if nothing happened.”

Marshall spoke up, “well that’s alright then. Isn’t it love?”

Marshall looked around but couldn’t see anything.  “Where?  Looks clear.”

Marshall swivelled his gunners chair around, saw the bird and shot three peas for a direct hit.

Dreamer, still with concern on his face said “That’s lovely to know Marshall but that wasn’t the only bird.” Marshall snapped back to reality and looked around just in time to see a flypast by a big black bird.

“Easy peasy!” He said. “Time to work.  Dreamer, you concentrate on speed, make sure you slow up when Margaret gives the word.  Margaret, you know what to do.”

Suddenly, the whole air changed around the team and they became one as they fought off each bird.  Margaret truly impressed Dreamer with her maneuverability, effortlessly avoiding every single attack. While Marshall, a seemingly dithering old man with shaky hands, suddenly became an expert marksman, able to perfectly shoot every bird that attacked.

It took less than five minutes to deal with the attack.  During it, Marshall had spotted the exit door and so they headed straight for it once clear.

“Isn’t that the two girls who flew off at the start?”  Margaret said as the door came into view.

Looking forward and squinting as much as he could, Marshall could make out the two girls.  But there was no Dragonfly.  “by jove, I think you’re right dear.” He said.  “But where’s their dragonfly.  Are they.. Going to fire on us?”

But at that moment, a shot came ringing past them brushing, but not damaging, one of Dreamer’s wings.  With a second on the way, Margaret did evasive maneuvers and avoided the pea easily.  After it went past, She turned around to check on Marshall. “aaaahhh” she screamed.

Marshall turned around to be greeted by a huge open beaked mouth almost ready to engulf him. 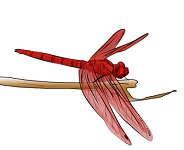